From the new GQ article “And He Shall Be Judged” by Robert Draper.

On the morning of Thursday, April 10, 2003, Donald Rumsfeld’s Pentagon prepared a top-secret briefing for George W. Bush. This document, known as the Worldwide Intelligence Update, was a daily digest of critical military intelligence so classified that it circulated among only a handful of Pentagon leaders and the president; Rumsfeld himself often delivered it, by hand, to the White House. The briefing’s cover sheet generally featured triumphant, color images from the previous days’ war efforts: On this particular morning, it showed the statue of Saddam Hussein being pulled down in Firdos Square, a grateful Iraqi child kissing an American soldier, and jubilant crowds thronging the streets of newly liberated Baghdad. And above these images, and just below the headline secretary of defense, was a quote that may have raised some eyebrows. It came from the Bible, from the book of Psalms: “Behold, the eye of the Lord is on those who fear Him…To deliver their soul from death.”

This mixing of Crusades-like messaging with war imagery, which until now has not been revealed, had become routine. On March 31, a U.S. tank roared through the desert beneath a quote from Ephesians: “Therefore put on the full armor of God, so that when the day of evil comes, you may be able to stand your ground, and after you have done everything, to stand.” On April 7, Saddam Hussein struck a dictatorial pose, under this passage from the First Epistle of Peter: “It is God’s will that by doing good you should silence the ignorant talk of foolish men.”

These cover sheets were the brainchild of Major General Glen Shaffer, a director for intelligence serving both the Joint Chiefs of Staff and the secretary of defense. In the days before the Iraq war, Shaffer’s staff had created humorous covers in an attempt to alleviate the stress of preparing for battle. Then, as the body counting began, Shaffer, a Christian, deemed the biblical passages more suitable. Several others in the Pentagon disagreed. At least one Muslim analyst in the building had been greatly offended; others privately worried that if these covers were leaked during a war conducted in an Islamic nation, the fallout—as one Pentagon staffer would later say—“would be as bad as Abu Ghraib.”

But the Pentagon’s top officials were apparently unconcerned about the effect such a disclosure might have on the conduct of the war or on Bush’s public standing. When colleagues complained to Shaffer that including a religious message with an intelligence briefing seemed inappropriate, Shaffer politely informed them that the practice would continue, because “my seniors”—JCS chairman Richard Myers, Rumsfeld, and the commander in chief himself—appreciated the cover pages.

Let’s give those verses a little more context:

16 No king is saved by the multitude of an army;
A mighty man is not delivered by great strength.
17 A horse is a vain hope for safety;
Neither shall it deliver any by its great strength.

18 Behold, the eye of the LORD is on those who fear Him,
On those who hope in His mercy,
19 To deliver their soul from death,
And to keep them alive in famine.

20 Our soul waits for the LORD;
He is our help and our shield.
21 For our heart shall rejoice in Him,
Because we have trusted in His holy name.
22 Let Your mercy, O LORD, be upon us,
Just as we hope in You.

10Finally, be strong in the Lord and in his mighty power. 11Put on the full armor of God so that you can take your stand against the devil’s schemes. 12For our struggle is not against flesh and blood, but against the rulers, against the authorities, against the powers of this dark world and against the spiritual forces of evil in the heavenly realms. 13Therefore put on the full armor of God, so that when the day of evil comes, you may be able to stand your ground, and after you have done everything, to stand. 14Stand firm then, with the belt of truth buckled around your waist, with the breastplate of righteousness in place, 15and with your feet fitted with the readiness that comes from the gospel of peace. 16In addition to all this, take up the shield of faith, with which you can extinguish all the flaming arrows of the evil one. 17Take the helmet of salvation and the sword of the Spirit, which is the word of God. 18And pray in the Spirit on all occasions with all kinds of prayers and requests. With this in mind, be alert and always keep on praying for all the saints.

11Dear friends, I urge you, as aliens and strangers in the world, to abstain from sinful desires, which war against your soul. 12Live such good lives among the pagans that, though they accuse you of doing wrong, they may see your good deeds and glorify God on the day he visits us.

13Submit yourselves for the Lord’s sake to every authority instituted among men: whether to the king, as the supreme authority, 14or to governors, who are sent by him to punish those who do wrong and to commend those who do right. 15For it is God’s will that by doing good you should silence the ignorant talk of foolish men. 16Live as free men, but do not use your freedom as a cover-up for evil; live as servants of God. 17Show proper respect to everyone: Love the brotherhood of believers, fear God, honor the king.

It’s almost too easy, you know? 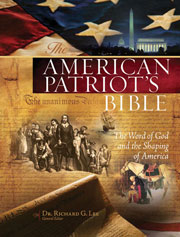 One of the more unsettling aspects of the Patriot’s Bible is the way it unashamedly glorifies nationalistic violence. Almost every nation and tribe throughout history has shared the idolatrous assumption that its military victories were evidence of divine favor. This has been a staple of pagan religion from the start. From its earliest days this same assumption has permeated American culture, it’s just that our tribal warrior god was called “Jesus” or “Jehovah.” In the Patriot’s Bible, this idolatrous mythology is given the appearance of divine authority by being interwoven into the biblical narrative.

From cover to cover, and in a wide variety of ways, the Patriot’s Bible is filled with glorified nationalistic violence. A good portion of its commentaries focus on America’s victorious wars (Vietnam, not so much) and on war heroes. Moreover, the introduction of every book of the Bible is accompanied with a montage of national monuments, symbols, stars and stripes, etc…that include, with few exceptions, images of armed soldiers, bombers and battleships. Most remarkably, each Gospel (The Good News ofJesus Christ!) opens with a picture that includes soldiers struggling to raise a flag under the words “In God We Trust.” All the subsequent books of the New Testament open with a montage that includes a flag waving behind the Statue of Liberty on one side and armed marching troops on the other.

When you consider the uniform and emphatic teaching of Christ and the New Testament authors that followers of Jesus are called to love and do good to our enemies, laying down our lives for them if necessary, this overt celebration of America’s violent victories over our national enemies is absolutely stunning. When you consider that Jesus explicitly repudiated Jewish nationalism (despite the fact that Israel, unlike America, actually had a special status with God) and that the New Testament consistently teaches that Gods’ Kingdom transcends national boundaries, the Patriot’s Bible celebration of American violence becomes more shocking still.

Ever been in one of those conversations about what went wrong with the Christians in Nazi Germany, why wouldn’t they stand up against the ghettos and the concentration camps, and how did they confuse being Christians with supporting the German government?  Well, now we know how that happens.  It’s happening right here, right now.  The American church is losing the ability to distinguish between God and country.  And it’s not the squishy liberal churches that have lost the plot on this one.  It’s the hard-core Bible believers.  We think we can go to war for the Prince of Peace and torture in the name of the Great Physician.  What happens if this trend strengthens in the next generation?  If America get more imperialistic and draconian, and the church applauds at every step?

Time for a modern Barmen Declaration.