Side Note: Regarding Adam, Job and Jonah

The three sections of the Old Testament that are most widely considered to be generally parabolic or mythopoetic rather than largely historical are Genesis 1-11, the book of Job and the book of Jonah. 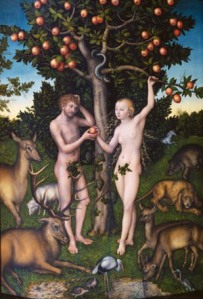 There’s a pretty clear break between Genesis 11 and 12 as we move out of primordial epic into the lives of the patriarchs.  We’re done with talking snakes, magic trees and flaming swords, and into something that isn’t straight history but definitely seems to be based on historical persons.  There is a groundedness to Abraham that isn’t present earlier.  The rest of the Old Testament seems to acknowledge this break as well:  there are forty-two references to Abraham after the book of Genesis, but only one definite reference to Adam (1 Chron 1:1).  Noah fares little better, with a total of three references (1 Chron 1:3-4; Isa 54:9; Ezek 14:14-20).  The stories of the patriarchs shaped the religious life of Israel far more than the primordial history did.  Even more striking, there are 121 Old Testament references to Moses that come after the Pentateuch.  While the patriarchs continue to be referenced, it is the exodus event that serves as the foundational narrative for Israelite society.

I mention this in part to point out that that the internal evidence in the Bible suggests that the earliest stories weren’t given nearly the “weight” in Israelite tradition that modern conservatives assign to them.  If you grew up in a fundamentalist or conservative evangelical context, you probably heard countless proclamations that the creation narrative is the foundation of our faith, and that everything stands or falls with the way that we interpret the creation week, Adam and Eve, and the flood.  Yet the scriptures treat Exodus as the primary story, with the patriarchal accounts as prequel, and 1-11 as prequel to that.  It’s not that they are disregarded–not at all–but it’s Moses who is the big deal in Jewish thought, not Adam.  They simply didn’t have as much riding on whether Adam was historical as we seem to.

When it comes to Job, I think it’s pretty clear why many people, even quite conservative scholars, treat it as ahistorical.  With the exception of the prose framework (chapters 1 and 2, and 41:7-17), the whole book is written in long dramatic monologues with a highly stylized a poetic sensibility.  No one really talks that way–sitting around taking turns doing spontaneous soliloquies.  It could be that it is a drama based on a historical event (like Shakespeare’s histories) but there’s certainly no compelling reason to assume so.  Within the larger canonical context, it strikes me as a story that was intentionally designed to counter a legalistic reading of Deuteronomy that insists that tragedy is always the result of sin.  Job is set up as the perfect foil: “So there was the man who was super righteous!  Really, really righteous!  God himself said he was the most righteous man on the whole earth!  And then tragedy happened!  Really, really awful tragedy!  The worst tragedy you’ve ever heard of!  And he had these three friends who tried to interpret it within their theological framework.  But they were all wrong!  Here’s what they said….” When you have a text with dramatic/poetic form and an extreme situation that is perfectly designed to raise theological questions, I think it’s a bit of a stretch to say that this is intended to be historical.

And then there’s Jonah.  A lot of folks consider Jonah a fable because of the part where he is swallowed by a great fish.  I see their point, but that’s not the issue for me.  I’m not really interested in spending a lot of time in a debate about miracles.  The more salient point, I think, is that Jonah, similar to Job, seems to be another story designed expressly to challenge bad theology.  Jonah is an extremely unsympathetic character.  He whines, he rebels, he gets upset when the Ninevites repent:

But this was very displeasing to Jonah, and he became angry. 2 He prayed to the Lord and said, “O Lord! Is not this what I said while I was still in my own country? That is why I fled to Tarshish at the beginning; for I knew that you are a gracious God and merciful, slow to anger, and abounding in steadfast love, and ready to relent from punishing. 3 And now, O Lord, please take my life from me, for it is better for me to die than to live.” (Jonah 4:1-3)

The kicker is when God withers a shade bush, exposing Jonah to the sun, and Jonah again gets angry.

Then the Lord said, “You are concerned about the bush, for which you did not labor and which you did not grow; it came into being in a night and perished in a night. 11 And should I not be concerned about Nineveh, that great city, in which there are more than a hundred and twenty thousand persons who do not know their right hand from their left, and also many animals?” (Jonah 4:10-11)

This is another story that intends to undermine self-serving religion.  A Hebrew prophet is acting like a whiny infant because God is being gracious and loving! He wants God to be harsh and vindictive with his enemies, but continually gracious to him and his friends.  He even quotes the great faith confession of Exodus 32:4 disapprovingly.  Again, this strikes me as a parable to raise pertinent theological questions–and to expose a self-serving theology as base and infantile.  Read Jonah against the backdrop of the other minor prophets, and it’s an obvious outlier.  I think the parabolic nature of the story is obvious in the greater context.

My friends who insist on the historicity of these three texts have a quick rejoinder, one that to them seems insurmountable.  Adam, Noah, Job and Jonah are all mentioned in the New Testament.  Because the New Testament writers (and Jesus himself!) reference them, they must therefore be taken to be historical accounts.  I’ll address that in a future post.