An Atheist Who Gets It 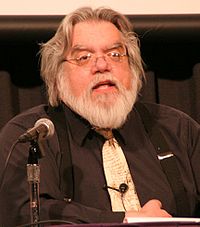 A lot of the atheists I run into have a really warped view of the Bible–almost the mirror image of the fundamentalist view. I understand where that comes from–it’s largely a reaction to vocal fundies in the media. But for people who espouse the virtues of rational discourse to dismissively refer to the Bible as a collection of fairy tales about an evil old man in the sky is an absurd a failure to see what it actually is–about as absurd as saying that it is inerrant and never contradicts itself.

Robert Price, an atheist speaking to a group of (mainly) atheists, gives them a better view of what the Bible actually is, and why even a non-believer can (and should) love it.

Listen to it here, on the podcast of the “Point of Inquiry” radio show.

Filed under Bible, This Is Good